In the enchanting setting of Lake Garda, the language of augmented reality is ready to make way for the visiting public at the Scaliger Castle, a suggestive and fascinating place in the town of Malcesine. The contents, accessible by wearing Epson Moverio Smartglasses integrated with the patented ARtGlass technology, rearrange the years of history of the fortress, starting from the first settlements in the Iron Age and passing through periods of invasion, destruction, and rebuilding that the Scaliger Castle has undergone over the centuries until it became a national monument in 1902.

The castle’s passage through the hands of the Longobards, Franks, Scaligeri, Venetians, French, and Austrians has resulted in what it is today: a complex intertwining of modifications and adaptations from various eras and dominions, all waiting to be discovered. With “Castello di Malcesine – ARtGlass® Experience” – available in two languages (Italian and English) – the technology and editorial language of the ARtGlass team highlight these traces. The tour guides the visitor inside the fortress, highlighting 14 points of interest through which to read the stratification of history and the multifaceted identity of the medieval castle.

To accompany the story, digital restoration interventions and immersive environments reveal unpublished geo-referenced reconstructions to the public’s attentive eye, allowing them to compare the appearance of the fortress in different historical periods.

A passionate connoisseur of the castle will have the role of guide along the way: Johann Wolfgang von Goethe. The German writer and playwright who, struck by the castle’s beauty, decided to stop there during a trip to Italy in 1786, however, was soon detained by Venetian authorities on suspicion of espionage. At the end of the tour, once near the bust with the effigy of Goethe’s face that the Castle of Malcesine has dedicated to him, the poet himself reveals the details and tells the rest of his story. 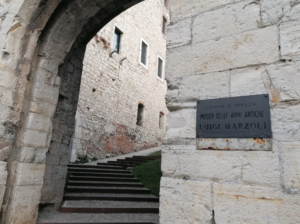